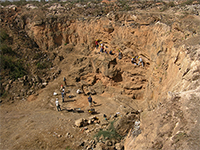 To date, in Africa, evidence for animal processing and consumption in caves routinely used as living spaces is only documented in the late Middle Pleistocene of the North and South of the continent and postdates the Middle Pleistocene in East Africa. Here we report the earliest evidence in a North-African cave (Grotte des Rhinocéros at Casablanca, Morocco) of cut, percussion and human gnawing marks on faunal remains directly associated with lithic knapping activities in the same space and in a well-documented stratified context. Ages for this Acheulean site are provided by the dating of herbivorous teeth to 690-720 ka and 520-550 ka (lower and upper sets) by combined Electron Spin Resonance (ESR) and U-series techniques. Traces of butchery on gazelle, alcelaphin, and zebra bones demonstrate that hominins had primary access to herbivore carcasses. Hominins brought and consumed meat in the cave, as documented by herbivore bones bearing human tooth marks concentrated in a circumscribed area of the excavation. In Africa, this site provides the earliest evidence for in situ carcass processing and meat-eating in cave, directly associated with lithic production and demonstrates the recurrent use by early Middle Pleistocene hominins of a North African cave site 400 000 years before that by Homo sapiens at Jebel Irhoud (Morocco). 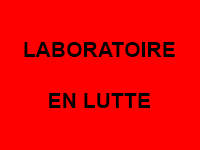 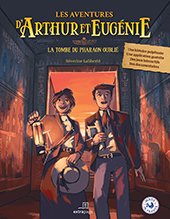